“La Promesse” and the one we make to each other 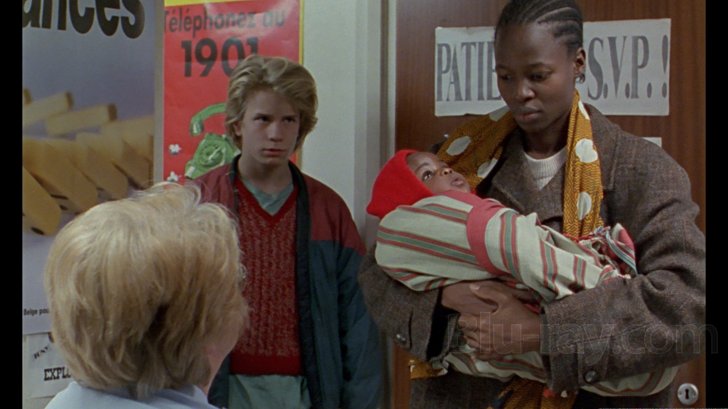 It’s a rare film that sends me straight to the keyboard to sing its praises and search for its flaws, but that’s what La Promesse has done. I finished watching it for the first time not more than thirty minutes ago, and the movie impressed me more and more with each passing second. It’s no secret I’m a fan of Luc and Jean-Pierre Dardenne, the brother act that made Le Fils, L’enfant, and the enchanting Kid with a Bike.

All these films, along with Rosetta, the one other movie of theirs I’ve seen, have at their centers a family – or, more accurately, genetically related people struggling to perform familial roles and failing spectacularly. In La Promesse, that family is a father and son team played by Olivier Gourmet (star of Le Fils) and the young Jérémie Renier (who would go on to play fathers in L’enfant and Kid with a Bike). But there’s another family in La Promesse. Roger and Igor, the father and son, are Belgian coyotes who shelter illegal immigrants, forge papers for them, and exploit them for labor and money. The film begins when Roger brings Burkinabe immigrant Assita (Assita Ouédraogo) and her baby son to live with Hamidou (Rasmané Ouédraogo), Assita’s husband and the baby’s father. Like the other Dardennes films (with the exception of Kid with a Bike), the story takes place in winter, with Liège depicted as a cold, bleak city. Igor is apprenticing half-heartedly at a garage while his father bilks the aliens and forces them to repair a house he plans to occupy with Igor. Unexpected turns unite Igor with Assita in the titular promise, and now the teenager must navigate a thorny maze of moral choices. His journey is every bit as harrowing and exciting as the hero’s journey in Star Wars or Lord of the Rings. To survive it, he must find courage, fortitude, and virtues he sorely lacks (his very first act in the film is stealing from a customer at his garage).

But this film is not just about Igor. Assita is a real surprise. She is a self-sufficient woman who uses scraps to build pens for chickens and a ram in the alley behind the tenement where she lives. There is a moment late in the film where she physically demonstrates a fierceness that shouts: “DO NOT MESS WITH ME.” The moment is surprising because we are used to the image of immigrants, especially women, as victims. This moment – indeed the whole movie – reminds us that people who uproot from the familiar in search of opportunity are the most resolute and persistent of their kind. The passive, the unadventurous – they stay home.

What La Promesse says about immigrants is the other reason I felt compelled to write about it. While I am weary of journalists, pundits, and others gravely warning of consequences in “the age of Trump,” it is true the debate over illegal immigration ignores the humanity of the immigrants themselves. Conservatives rightly declare that laws must be upheld but rarely question what the human cost of these laws are and whether they infringe upon human dignity. Liberals welcome illegal immigrants, but offer no structure and no path in a scary new land. Their refusal to deal with the illegality of their situation (combined with the worship of their “otherness”) consigns them to the shadows and slows their assimilation and their success. Assita’s greatest help in La Promesse comes from another West African woman – this after Assita rails that “all white people want her dead.” Considering her treatment in the film, she’s not far off.

The brief turn of events with the other African (her home country is never mentioned) recalls the heyday of immigration in the United States. When conservatives demand immigrants quickly assimilate, they forget that generations of newcomers clustered in ethnic enclaves. It was possible for a Swede in Minnesota, a Chinese in San Francisco, or an Italian in Brooklyn to never speak English and still work, buy food, and conduct business. They helped one another thrive, a situation only possible because they were legal and because American communities of the 19th and early 20th centuries were largely unregulated and laissez-faire. The opportunity was there, and the freedom to prosper was also there. So in La Promeese Assita’s hope contrasts with the bleakness of her surroundings and her situation. In fact, if we had to bet on Assita or her male immigrant neighbors, who gamble and cheat each other, the smart money would be on the mother.

So a film made in Belgium in 1996 resonates deeply in 2017 America. And what a film it is. The film is shot like all Dardennes films – mostly with a handheld camera, mostly with seemingly uninspired lighting, with the focus on splendid, naturalistic acting. Or so I thought. There came a shot, again late in the movie, where Assita is filmed in profile, a rim light separating her from the dark background. This is deliberate cinema, not hammer-and-nails filmmaking! Neither is the choice of what to show and when to show it. There is a moment when Igor startles a squatter, who darts past him guiltily. The boy enters the apartment and looks down at something he left behind. The camera stays behind Igor for what seems like forever. “Tilt down! Tilt down!” I screamed in my mind. But the Dardennes take their time and draw out the question of what Igor finds, just as they do in all their films, toying with expectations. In this film, the miasma of guilt that clings to Igor is more vital than the actual object on the floor. Another masterful moment: Igor gives Assita a large sum of money. When Roger finds out, he beats his son savagely. But then his anger dissipates, and the two enjoy a laugh in the tiny apartment they share. Does that sound familiar? It is if you’ve seen The 400 Blows.

Luc and Jean-Pierre Dardenne, like Truffaut, tell the truth. In La Promesse, the truth is that a fellow human being’s anguish demands an answer. When the person is an alien, a foreigner, perhaps we can trick ourselves into ignoring their anguish in the name of the law, family, or money. But not forever. Whether we realize it or not, we have a covenant – a promise – with one another. I don’t believe the Dardennes set out to make a political statement (and if they did, there’s plenty in their film to disparage both law-and-order conservatives and open-border progressives). But La Promesse is a powerful statement for our times. And more than that, it’s the best entertainment, an understated yet soaring work of art that shows a huddled mass of humanity yearning to lift a lamp beside a golden door.

« To tell the truth
Screencraft: 35 Most Overused Lines of Dialogue in Screenplays »